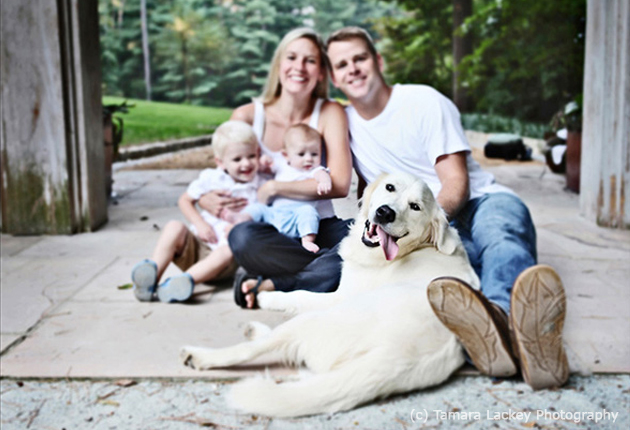 Life kinda sped up for Lindsay Wojciechowski this past summer.
She was nine months pregnant with her second child right around the time her husband, Steve (“Wojo”), was fully engaged with the ACC Tournament. Steve is the Associate Head Coach for Duke University’s basketball team – and, as the ACC Tournament was ending on Sunday, they learned that he’d be leaving for the NCAA tournament on Thursday.
So they did what any self-respecting diehard basketball family would do: they induced Lindsay’s labor so that little Charlie was born right in the middle of the four days Steve would be home, on a Tuesday.
What followed next was a series of big ups and big downs. First of all, Duke won the 2010 National Championship – resulting in happy chaos, tons of media and a whirlwind trip to visit the White House to meet the President. Lindsay socialized with the jubilant team and then returned home for what was supposed to be her normal life. Normal life included her 6-week postpartum checkup.
It was there that she received some concerning news. Initial tests proved troublesome. But nothing was conclusive yet.
It would take another two months before there was an official diagnosis: Lindsay, age 33, had cervical cancer.
She also had infant. And a 2 year-old. And a husband. And a dog. And a medical career.
And, of course, a bevy of friends and a full, very close family who loved her dearly.
Things moved even more quickly after that. Within two weeks, she was checked into Duke University Hospital and undergoing a extensive, radical surgery to remove the tumor. She went into the hospital buoyed by prayers and pep talks. And then there were all the notes and cards – Steve had asked friends and family to pick one word that exemplified what they hoped Lindsay would focus on, what she could hold dear throughout this process.
HOPE
BELIEVE
FAMILY
FAITH
STRENGTH
WILL
LAUGHTER
Sweet two year-old Jack had his own contribution. AIRPLANE.
Ten days after surgery, they received their pathology report. And it was bad news. She was told to start chemotherapy and radiation immediately.
She didn’t. Because something didn’t make sense. They weren’t sure yet, but they consulted with several pathologists – and, then, unbelievably: another twist. This time a thrillingly happy one. Two days later they found out that there had been some mix-up with the initial pathology report. There had been a mistake. The new results were very different from the first set of results and exceptionally more optimistic.
Lindsay is a friend of mine. When she emailed me and her friends and family with this new update, the uproar of thrilled relief was palpable. A number of emails flew back and forth and several of them included not-for-TV language that you wouldn’t have expected with a mass email but that so encapsulated the joy and relief that everyone felt.
Only days later, we did this shoot. On a sun-washed Carolina morning, we all got together to showcase this stronger and more committed family. And Lindsay and Steve looked even more beautiful than I’d ever seen them. Which is saying a lot.
This shoot was a joy and a treat, and I’m reminded again and again why photography matters. Why crystallizing moments and experiences and growth and life is so compelling and emotional.
And why love always comes first.
(Such love to you, Lindsay 🙂 You’ll see why Kobe was exiting the water so fast … I wasn’t kidding about the good lookin’ness, huh? Even as everything in the world changes, some things never do.
I caught a random candid of Jack (on left) during the shoot but didn’t realize until I was editing the shoot that I had caught a very similar moment two years ago, when Jack was just a baby (on right). I love how photographing children over time are full of finds like this.