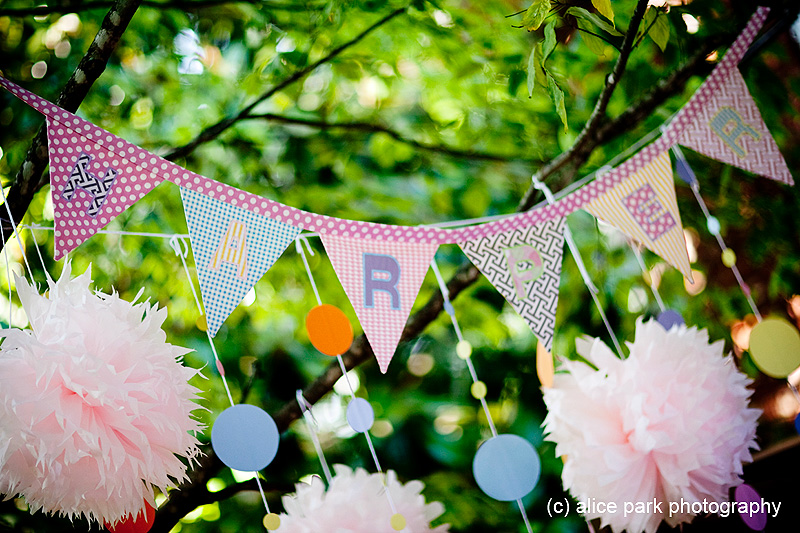 We always love a good party, especially when most of the details were DIY projects mom did herself at home!  For today’s Session Share, we’re sharing images from Harper’s 1st Birthday and asking mom about the inspiration behind it all.  Enjoy! Tell us about the theme of Harper’s 1st Birthday Party.  What was your inspiration behind it?

The theme was created around the Varsity Truck, we wanted to celebrate Harper’s Atlanta roots, and the Varsity makes it easy to cater the party because they do everything from the food truck!   We had a previous Halloween party using the Varsity Truck and people really enjoyed it, so we thought we would do it again!  Harper’s middle name is Elliott, “Ellie”, so we incorporated a baby elephant with a circus design, which fit well with the Varsity Truck.  This was the overall theme for the party!

I found the party to be an excuse to try and do many new craft projects!  I love to sew and craft so I made many of the items, when I say “I”, I also mean my Mom and I, plus the rest of the family that helped! Tell us about the details!  The invitations, the party favors, the treats, etc!

The invitations, thank you’s, cupcake toppers, party favor beach pail and stickers, animal cracker tags and animal cracker bags, and all paper goods were created by Nico and Lala in Nashville, TN.  We did all correspondence by email and they were amazing to work with!  They even included a photo of Harper on the invitation!  Plus, they customized each beach pail favor with the child’s name printed on waterproof stickers!  We chose pastel colors for the invite in honor of Harper still being a baby, playing up the pink!  Nico and Lala can provide everything from the paper goods to party items.  I took all inspiration from the invitation!

The fabric name banner resembled the banner on the invite.  I appliqued “HARPER” on one side and “WISHES” on the other, as it was seen from both sides.  I made a simple triangle template for a pattern, so each piece would be the same size, this way it could be as small or big as desired.  The banner helped bring the invitation to life!

The sticker garland was made from directions and stickers from Paper Source.  The garland is pictured on the back of their label packets. The plywood elephant cutouts were made by Harper’s grandparent’s.  The elephants were about 3 feet tall and 3 feet wide.  I made a mock up from cardboard and Papa used it as a template to cut the plywood.  Nana then painted each elephant a pastel color and made matching yarn tails.  Papa drilled a hole in the trunk, so we could hang balloons from the trunk.  The elephants were placed all over the yard and the kid’s enjoyed playing with them!

I made Harper’s first birthday dress using Liberty of London fabric, tana lawn sarah’s secret pastel garden, purchased from Purl Soho.  I digitized/scanned the elephant from the invitation into the computer and appliqued it on the small pocket of the dress.  The elephant has a pink braided cotton floss tail!  I am hoping to make her a party dress each year for her birthday. The party favors were pastel beach pails from Nico and Lala, they customized each pail with the name of the child printed on a waterproof sticker, which corresponded to the invite.  The pails were filled goodies!  One goodie was an elephant appliqued t-shirt or onesie, depending on the age of the child, which I appliqued on my home sewing machine.  Party crackers were handmade, following the directions from the Martha Stewart website.  The crackers had finger puppets and a small wooden toy inside.  They were made from crepe paper, which was ordered online at Blumchen because it is very hard to find crepe paper in sheets (not streamers) in local stores.  The outside party cracker paper was from Paper Source.  Plastic pastel pinwheels and silly straws were placed in the pails.  Nico and Lala created bags of animal crackers for each of the “Party Animals”!   And Nana created homemade elephant shaped iced cookies were also a take home treat.

Her birthday hat and bib were also appliqued using the same elephant from the invite and dress.  The elephant fabric was purchased from Etsy at the J Flair Goods shop, they have many wonderful Japanese products.  I sewed the hat using a neighbor’s hat as a template and as a reference.  The flower ribbon on the top of the hat is a hair clip for when Harper is older and has hair!  The inspiration, direction, and ribbon are from Nicholas Kniel.  The bib was purchased at the Atlanta Sewing Center, then appliqued and embroidered to match the hat. Any last thoughts of it all?

I found the party to be an excuse to try and do many new craft projects!  I love to sew and craft so I made many of the items, when I say “I”, I also mean my Mom and I, plus the rest of the family that helped!  Harper’s Nana made all the delicious cupcakes and the darling smash cake, which Harper so daintily enjoyed!  Nana also made all the elephant shaped sugar cookies with homemade royal icing, tinting them all the perfect pastel colors, which all the guests savored!  Harper had a wonderful first birthday party, it was extra special due to all the love of family and friends, we had a memorable day!

Thank you for sharing, Courtney(mom)!  We loved all of the details!