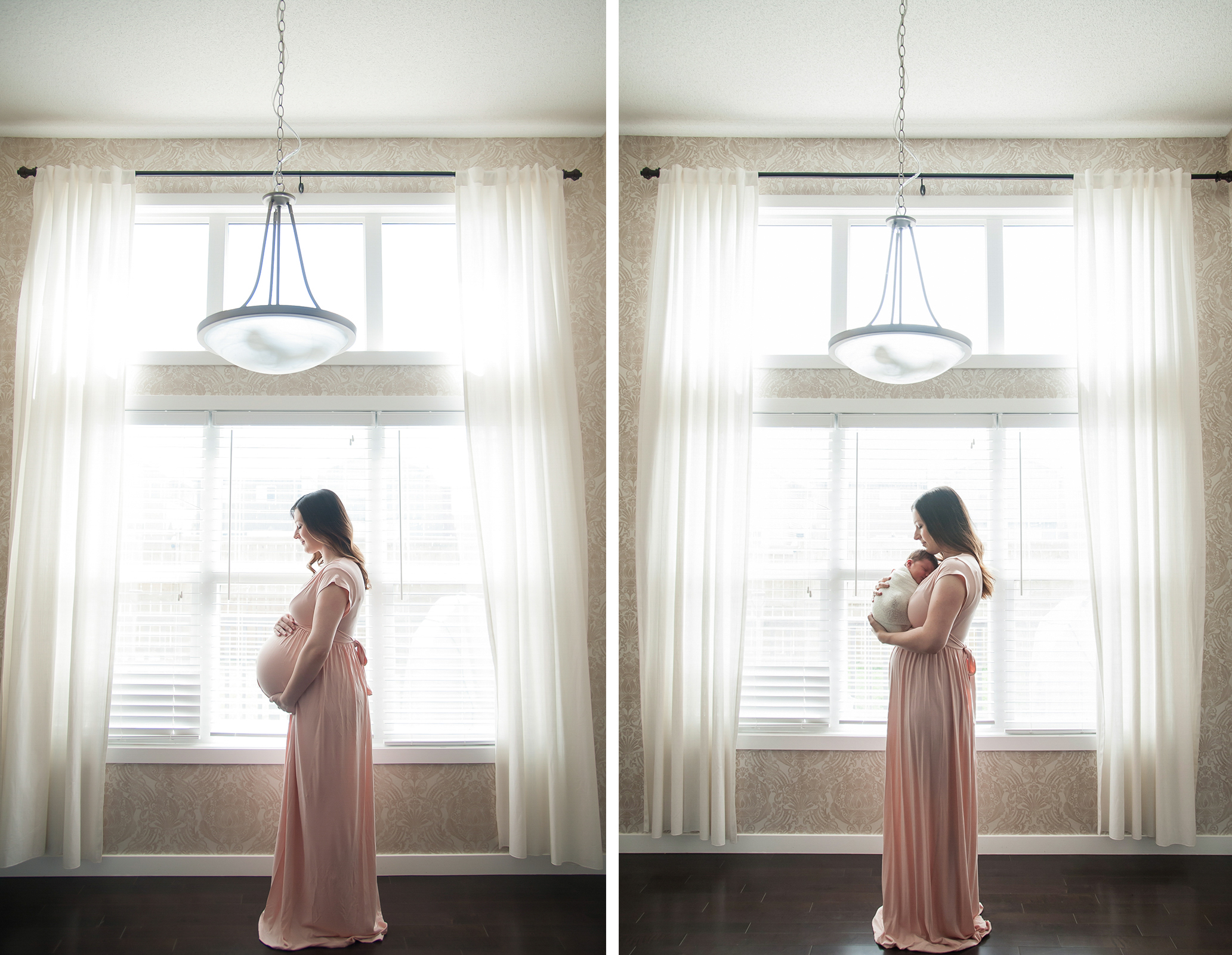 I put out a call for volunteers for the project in March 2014 and I received lots of interest from various parenting groups, friends and family members. I ended up with 20 amazing moms (and one dad!) who gave their time and commitment to me, and opened their homes to me not just once, but twice. I am eternally grateful to everyone who participated in this project. I enjoyed meeting and talking with all of these outstanding women and am appreciative of the time they gave up with their other kids to make these photos happen.
My intention with this project was to shoot something different and fun and to challenge myself with natural light and on-the-spot creativity … matching before and after scenes as best as I could – all in 20 different environments. Plus, my toddler came with me for most of the shots so I learned a lot about multitasking. That is, ensuring I could take an in-focus photo and then match that with another in-focus photo, all while my toddler was needing me and begging for my attention. That proved to be challenging at times, let me tell you. But I was determined to make it work, and I did.
I learned something with every photo I shot, which was, of course, the point. When I look back at the images, there are definitely things here and there that I didn’t notice at the time or that I thought about changing in-post, but I decided that I didn’t want to ‘fake’ or Photoshop anything about the images. So, what you see in every photo is straight out of camera with only colour correction done. The odd floor register or electrical socket might have been removed but that’s it. All photos are in colour to showcase the unique details of each family’s home. I asked all women to look down for every shot, to show the bond between belly and mother, and then baby and mother.
What I learned the most was to embrace the imperfection of things. There were things that changed the scene for some after shots, lenses that were broken that changed how I shot some second photos, unrecoverable files that caused some re-shooting, things that happened beyond anyone’s control that delayed second shots being done … and things that, in the end, really don’t matter. I’m proud of this project as it is and I wouldn’t change a thing about it.
All 20 sets of before and after images are below. I would love to hear what you think about this project – please feel free to comment at the bottom of the post!
Cheers,
Erin

Jen & Adam :: Adam’s date of birth {April 6, 2014}
Jen was the first person I photographed for this series. I caught her just before she was due and she ended up having a beautiful home birth just two days after I took the first photo. I was so glad I met her in time – she is such a lovely person and was so kind to me.

Justina & Rayana :: Rayana’s date of birth {April 10, 2014}
Justina welcomed me into her home right away. I was immediately drawn to the colour in the painting on the mantle and found out that Justina’s two girls had painted it. I thought it was perfect to include in the photos. And I love the way the light fell on Justina’s face for the shot as well.

Kelly & Theodore :: Theodore’s date of birth {April 11, 2014}
Kelly’s home had many beautiful spots, but when I saw the staircase, it pretty much took the cake. I loved the bright light and curvature of the stairs, and the angle from where I took the shot. Kelly’s 4-year-old daughter also “helped” me take the images by being my rock star assistant.

Erin & Luke :: Luke’s date of birth {April 12, 2014}
I met Erin when I worked at Dairy Queen, over 15 years ago. I was so happy when she volunteered to be a part of my photo series as I knew it would also be the perfect excuse to catch up. I loved the books on their townhouse wall so I decided to do the shot with them in the background.

Claudia & Lucas :: Lucas’ date of birth {April 12, 2014}
Claudia is a talented photographer and clearly an amazing artist, as she created and painted the stunning artwork on Lucas’ nursery wall. It was obvious that his room was the right place for the photos.

Theresa & Jude :: Jude’s date of birth {April 23, 2014}
Theresa is one of those people that makes you feel like you’re best buddies when you first meet. While looking for the right place to do the photos in her home, I immediately knew we would use her bedroom as the background as the LOVE banner was the perfect touch for the images.

Chris, Maribeth, Adelaide & Emalene :: Adelaide & Emalene’s date of birth {May 2, 2014}
Maribeth and I met while taking a darkroom photography class at SAIT. The following year, I had the honour of assistant shooting at her gorgeous wedding in Canmore. When I found out she and Chris were expecting twin girls, I was thrilled for them, and so excited to include a set of twins in the series.

Alexandra & Bodhii :: Bodhii’s date of birth {May 14, 2014}
When I first met Alexandra, she was all smiles and super friendly. I noticed her wall of family photos right away and decided to include them in the background of the shot. I also loved the way the light was so bright behind her.

Lisa & Marley :: Marley’s date of birth {May 23, 2014}
I was so in love with the front bay window in Lisa’s home – it provided us with beautiful light and a relaxing spot for Lisa to sit for the photos. When I went back to do the second photo, Lisa gave me a bottle of wine as a token of her appreciation. I was blown away at this kind gesture as I was the one who felt appreciative of her time and dedication to my project.

Jody & Violet :: Violet’s date of birth {June 4, 2014}
Jody is an incredible photographer – her work is simply stunning. I was so happy when she volunteered to be a part of my series. To get this shot we moved her kitchen table and chairs and it was definitely worth it. The light combined with her dress, hair, curtains, wallpaper … I love the way the final look came together.

Jen & Arden :: Arden’s date of birth {June 7, 2014}
Jen and her family live on a gorgeous piece of property. When I drove up, I knew I wanted to do the photos outside. When I returned to do the second photo, the grass had grown quite a bit but I loved that it looked a little different from the first photo to show the time passing.

Katie & MacKenzie :: MacKenzie’s date of birth {June 23, 2014}
Katie’s family lived next door to my family for years. I was looking forward to seeing her again and chatting about life. I caught Katie just in the nick of time for the first photo – she went into labour later that night. I was very happy that I could still include her in the project.

Diana & Tristan :: Tristan’s date of birth {June 26, 2014}
I was all about the colours in the banner above Diana’s front window, so I included it for the photos. I also loved her beautiful dress; it was the perfect colour to bring everything together. I moved several things out of the way for the shot so she would be the focus of the image and I think it paid off.

Emilie & Léa :: Léa’s date of birth {July 1, 2014}
Emilie’s home was so warm and welcoming and there was a ton of light to work with for the photos. Emilie has such a calm nature, it was so easy to capture both the before and after shot in hardly any time at all.

Jenn & Nolan :: Nolan’s date of birth {July 9, 2014}
I fell in love with Nolan’s nursery the second I saw it, so of course I wanted to use it for the photos. Jenn decorated it so perfectly with such a beautiful colour palette, and the light in there during the day is heavenly.

Andrea & Rhys :: Rhys’ date of birth {July 12, 2014}
Andrea is such a great soul – when I discovered that my second set of photos I originally shot of her could not be recovered, she opened her door to me again and let me come back for a third round of photos. Rhys was a few months older at this point but I decided that it didn’t matter – I wanted to include everything, to tell the full story of the series. And in the end I loved that they had moved some furniture around in their house to show the time that had gone by.

Kristen & Jasper :: Jasper’s date of birth {July 25, 2014}
The yellow lights in Kristen’s bedroom were unique and fun, and with the light from the side window coming in perfectly on Kristen’s face, I loved this shot. I sadly broke the lens I shot the first photo with so I had to use a different cropped sensor camera with a totally different lens for the second photo to be able to capture the same wide angle. In the end it worked out just fine.

Shannon & Chloe :: Chloe’s date of birth {August 2, 2014}
For this first and second photo set we had to switch it up a bit. The spot in the backyard where we shot the first photo was completely washed out with harsh sunlight when I came back for the second photo. So we moved to another cute little corner of the yard for the after shot and I love the way it turned out. The skirt was MIA the second time around but I love that we had a bit of a different outfit and location together which made it all perfectly imperfect in the end. And little Chloe’s dress is so adorable.

Kim & Leo :: Leo’s date of birth {August 16, 2014}
Kim is married to my cousin Mark, and I’m so happy she was expecting at just the right time, so she could be included in the series. She is the loveliest of people and I’m lucky she’s my family. I’ve always loved this chair of theirs, so naturally I wanted to use it for the photos.

Heather & Rhys :: Rhys’ date of birth {September 1, 2014}
This is one wall of the playroom in Heather’s house, and it’s awesome. I love that she has so many unique vintage items and art pieces, I didn’t hesitate to use them in the background of the photos. I loved wrapping up the series with this final set of images.

January 2022 Inspired Magazine: Featuring Kaitlyn Wiener!
10 Ways to Keep Your Newborn Clients Safe In Our Post-COVID-19 World by Ashley Salango
Session Share: Photos That Reflect Love, Joy and Gratitude, by Stacey Adams
We’re Loving This Newborn Session with an Older Baby
One of the Cutest Lifestyle Sessions We’ve Ever Seen