Creative Ways to Capture Photos of Your Kids on Halloween 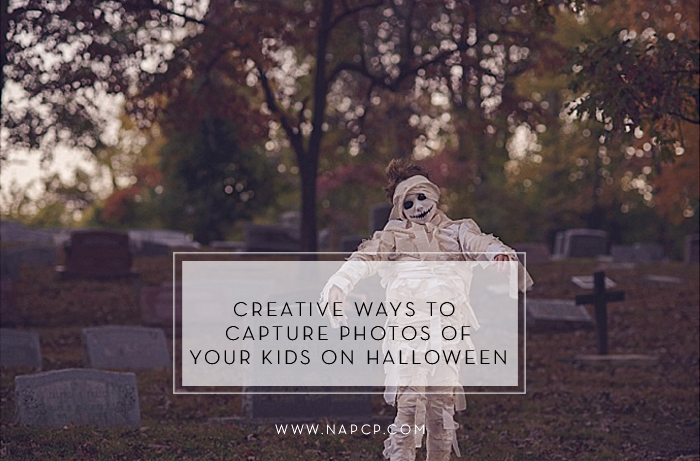 I love holidays. I always have. I grew up in a house that completely changed anytime there was a special date on the calendar. I think my mom has over 400 Santas (my sister and I counted once, when we were younger). She turned the milk green on St. Patty’s Day (we aren’t Irish), hung hearts in every single window on Valentine’s Day and I knew winter was over when the bunnies started appearing everywhere. Our neighbors would call her to ask if the bunnies were up as if those little guys were some kind of actual indicator that the weather was finally going to get warmer!
My kids are experiencing a similar upbringing, as there are pencils in jars on the table for the first day of school, and I stay up all night in November so they wake up to a Christmas wonderland when I’ve decided fall is over. Halloween though? It’s my favorite. I mean, CANDY! And scary decorations that allow you to really get creative, fire pits in the yard surrounded by neighbors and grandparents as the kids run from house to house and costumes. I love getting creative with my kids on their costumes. Sometimes I make them and sometimes they’re store bought, but it’s always so much fun to see them get lost in their imaginations as soon as that costume is on.
Last year I decided to actually capture them in their costumes. Not just a photo of them standing in our yard as they wait impatiently to go trick-or-treating but to actually capture them in their costume’s natural element. You guys, we had a blast! I spent just a little time with each kid dreaming up their photos and when we went out shooting I let them lead a lot of the time. We had so much fun and the results made us all so happy! I was so excited by it all that I offered it to clients at the last minute and I had two take me up on it. It was a GREAT way to bring in some unexpected income (even though fall is already the best season financially, my income is essential to our family, so everything helps) and I had so much fun doing it with my clients!
This is my son, Grayson. I made his mummy costume by tearing fabric and hot gluing it to a shirt and pants. He and I discussed all the places a mummy might hang out and he thought the cemetery was the best idea. Occasionally I had him tilt his head or close his eyes or something but mostly he led the posing and location – that helped him have way more fun than if I were directing him constantly! 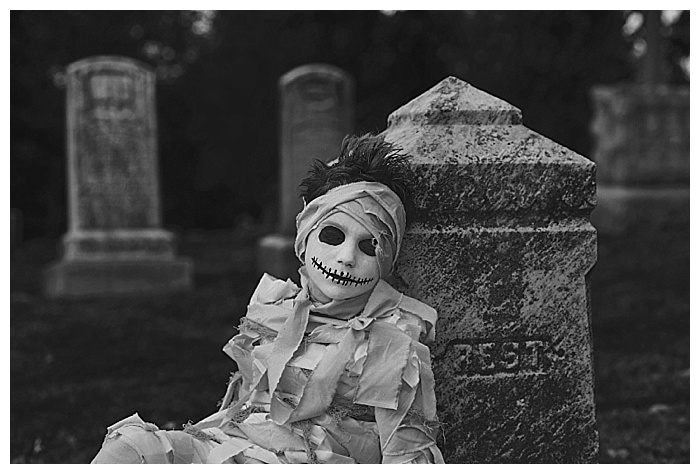 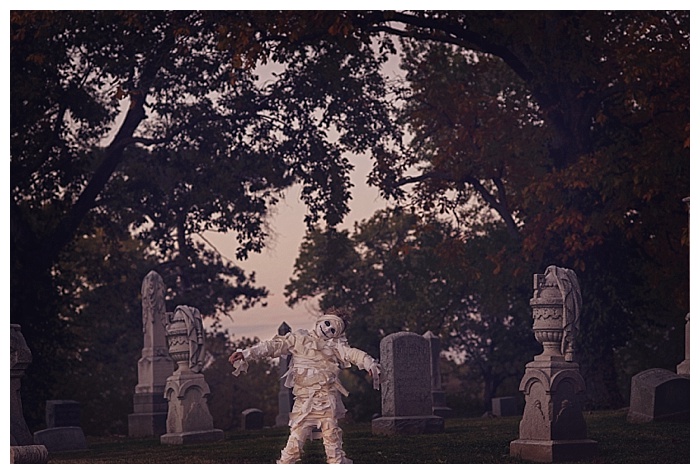 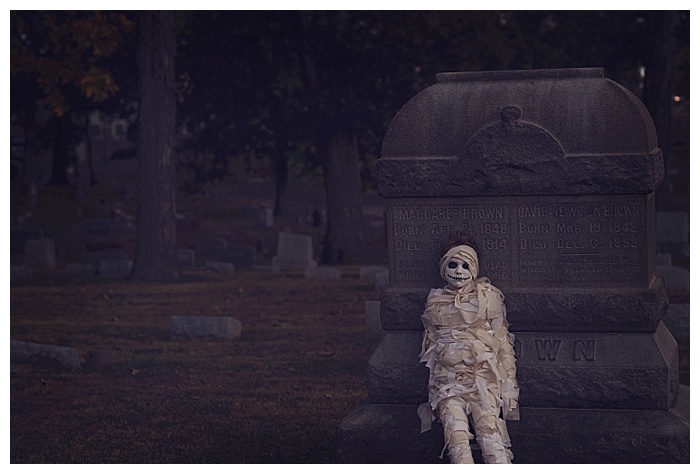 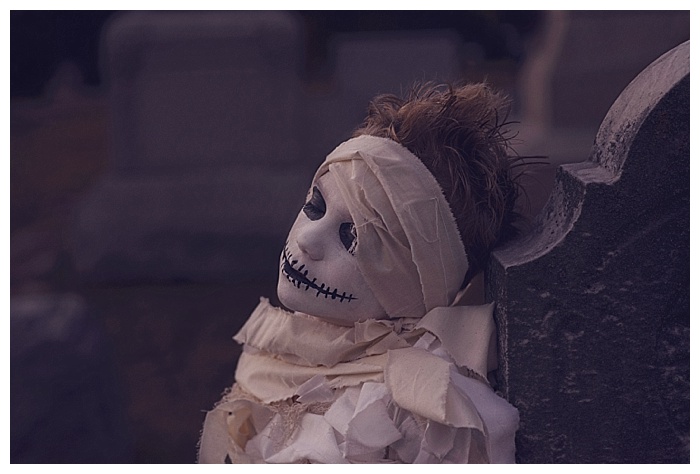 For my daughter, Parker, I actually brought her along to a client’s session, with their permission. The forest for her daughter’s Little Red Riding Hood session was PERFECT for Parker’s witch photos too. Doing them together was actually great as the girls had fun running on the trails together and giggling in their costumes! My favorite shot from Parker’s session is when SHE came up with the idea to jump in the air to make it look like she’s flying. The second I clicked the shutter I knew I was going to love it! 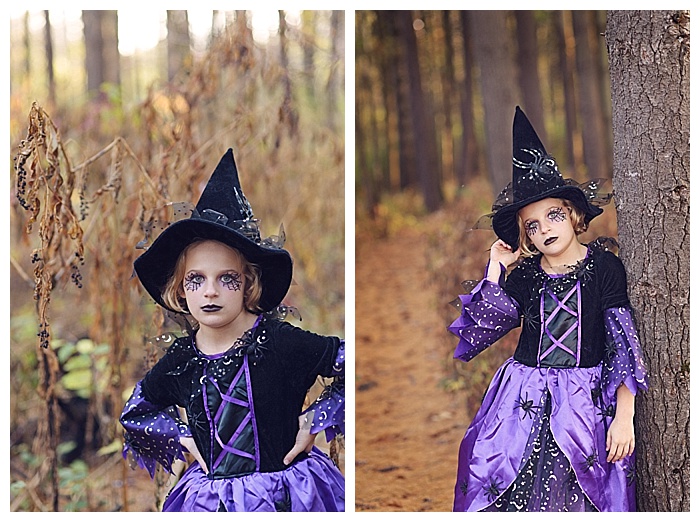 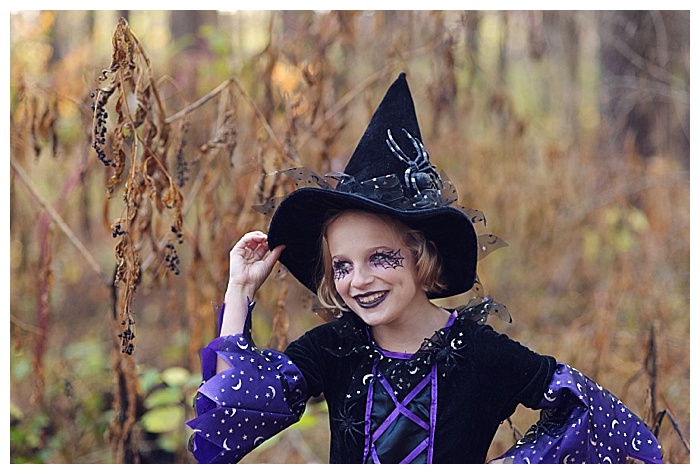 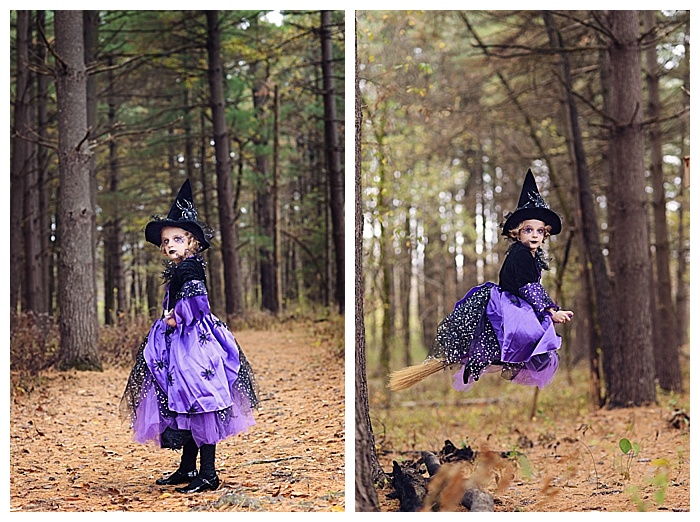 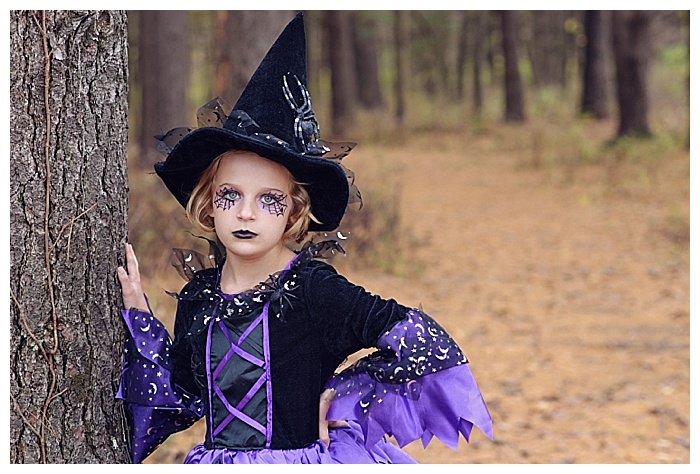 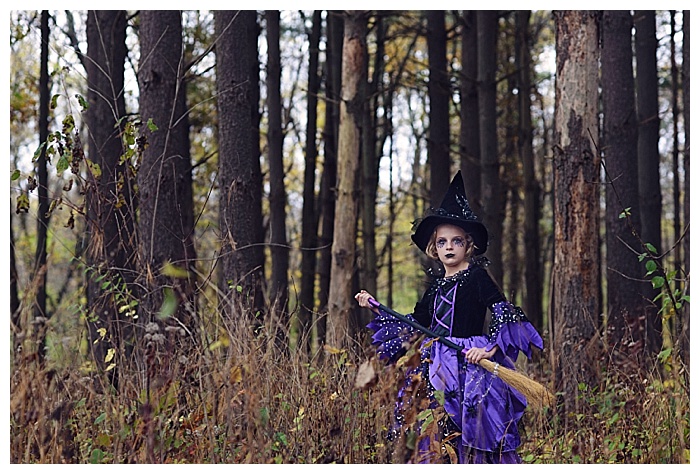 For the two sessions I booked with clients, one was Little Red Riding Hood and the other was Teenage Mutant Ninja Turtles. You know I used the same forest for Little Red as I did with Parker but the TMNT threw me a bit. They live in a SEWER and there was no way I was going into one with twin five year olds! HA! Then I remembered this state park that had tunnels under the road – mom was willing to drive a bit and it worked out great! She even brought pizza (because if you know TMNT, they LOVE pizza!), which made it perfect because her kiddos weren’t all that into me that day. 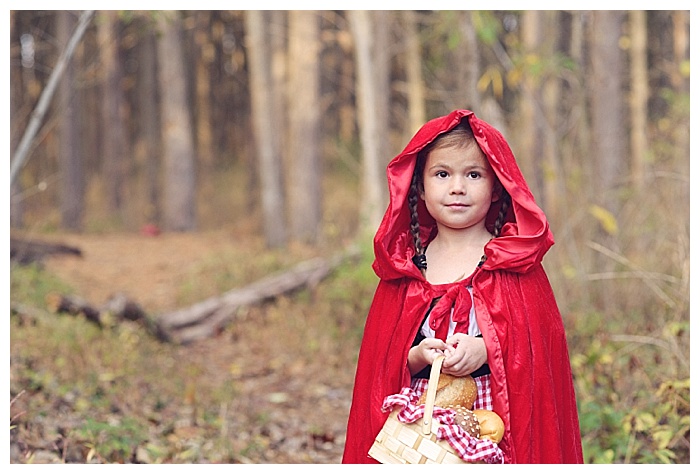 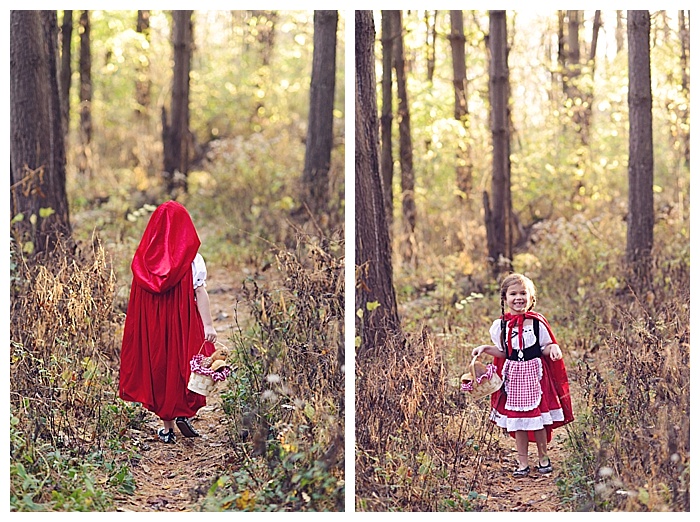 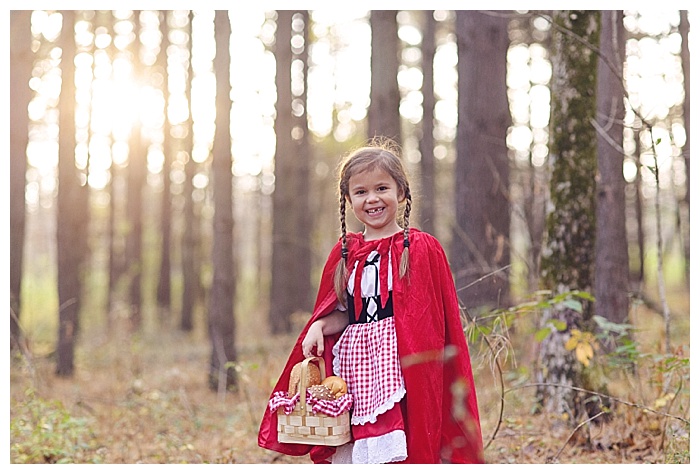 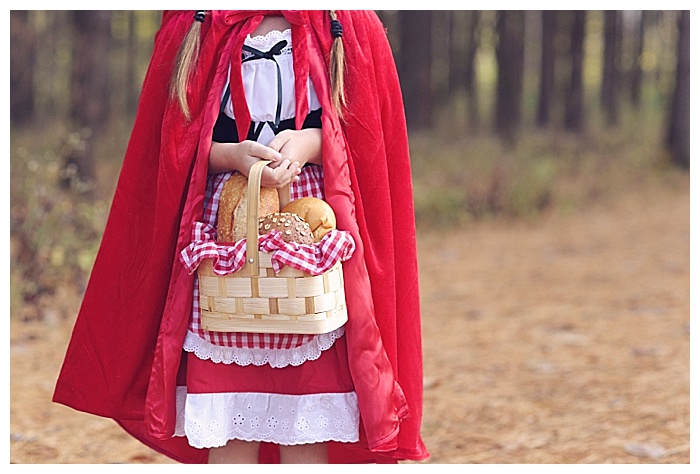 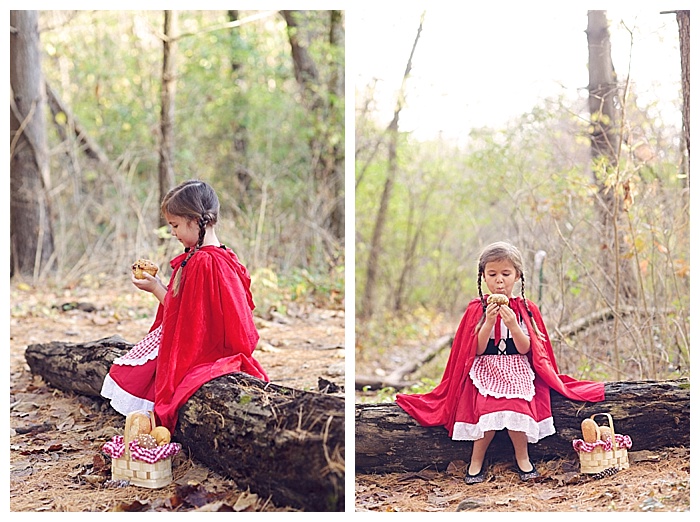 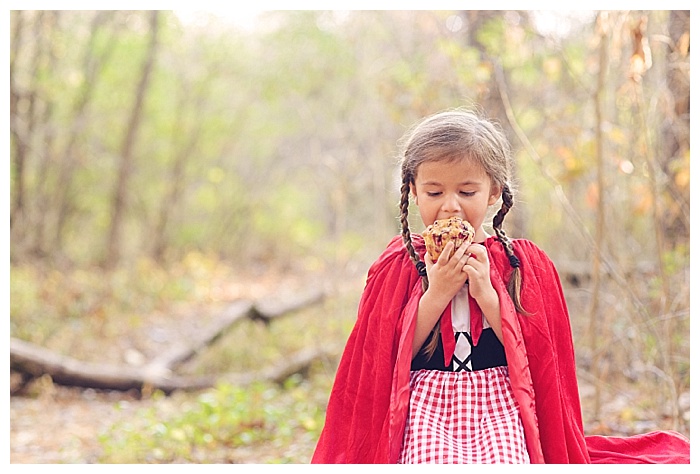 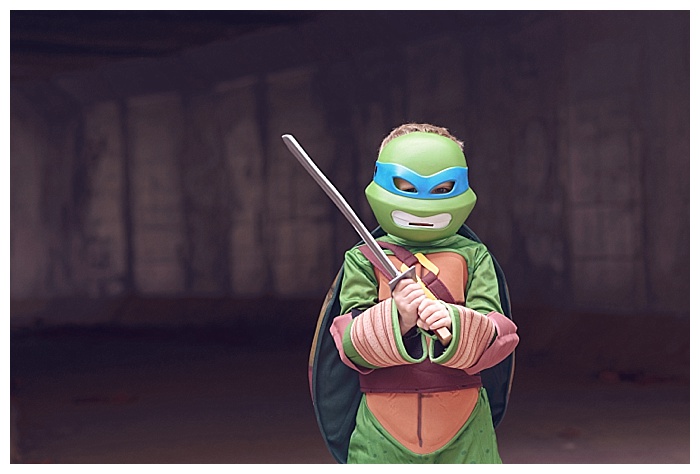 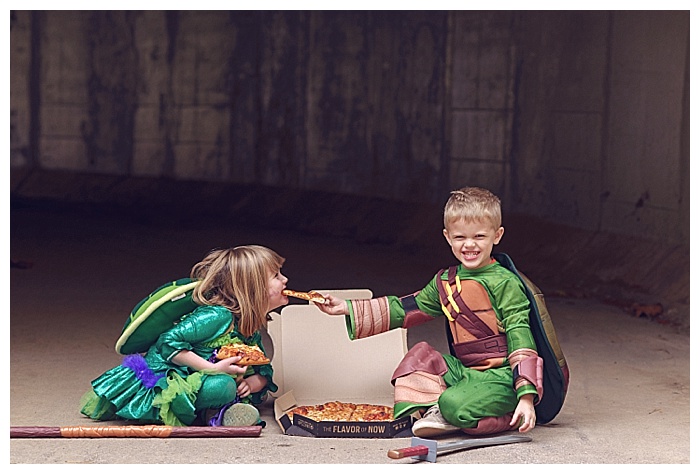 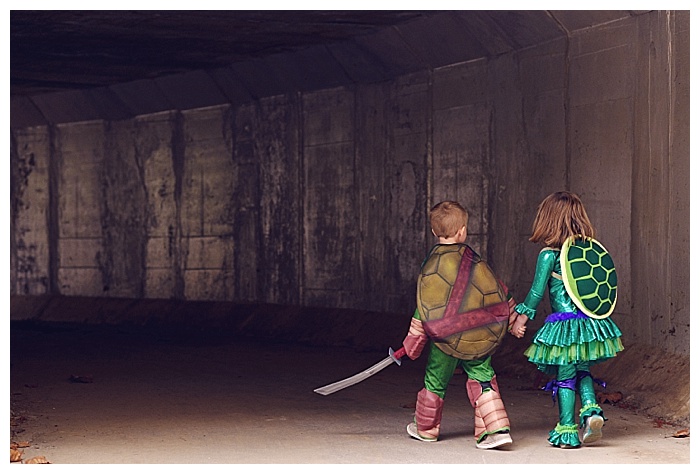 I have Halloween Mini Sessions planned for this year (I advertised on FB and it went out in my newsletter too). They really are a lot of work but I do offer a discount to my newsletter subscribers. I love these sessions and thought others might want to offer them too!
Oh, and my oldest daughter? She was Santa last year! I wanted to wait for snow but we didn’t get much last year so we only got one photo of her … 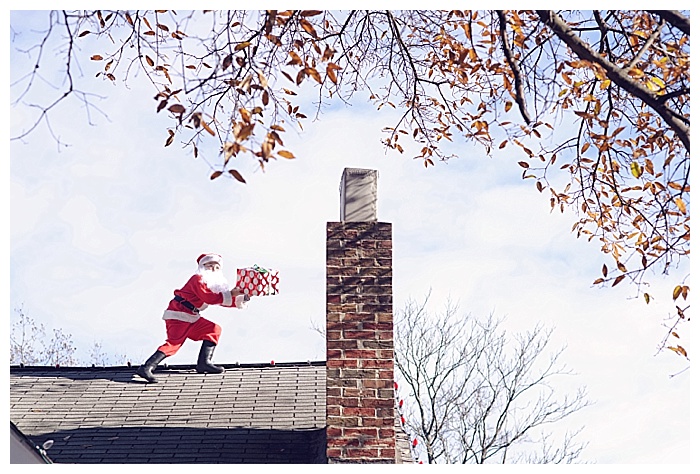 Why Limiting Mini Sessions is Good for Your Business, Your Clients, and You!
2017 #NAPCPHalloween Roundup!
Halloween 2017: An Escape to Wonderland
4 Tips to Make the Most Out of Your Family Mini Session
Free Printables: Halloween Luminaries!