Back to Basics: Film 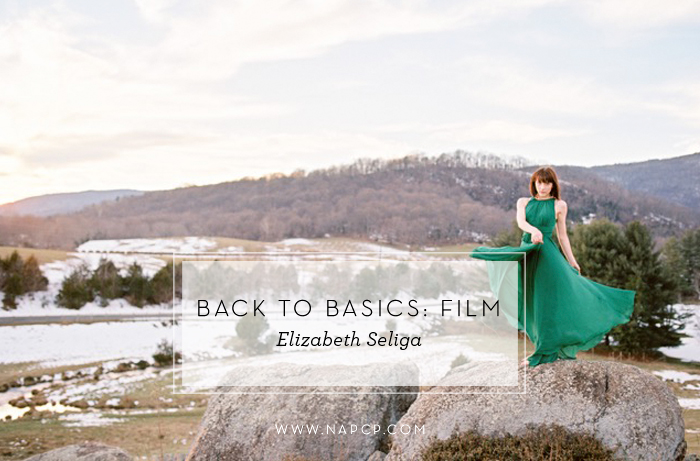 16 Aug Back to Basics: Film

“In a day of instant, film brings with it the anticipation and wait and the beauty in reliving those moments weeks later. There is a forgiveness with film, a little blur and softness adds to the beauty where with digital the expectation is super sharp & crisp. Life is soft and blurry so i think that is why people tend to be drawn to the film images, they just don’t really know why!”
Mandy Meece Johnson, Mandy Johnson Photography
***
I first started photography, like most of us did, by picking up our parents’ cameras and snapping images. The first camera I remember was one of those old Instamatic cameras with the flash cube. I moved on and began using my dad’s Pentax 35 mm camera when I was in high school, and that is also when I learned to develop my own film in the darkroom. Time moved on, as time is apt to do, and my parents bought me my own 35mm, a Nikon N65. I dragged that camera around everywhere with me. When I first began my professional career, the industry was still shooting film so my life involved a lot of time with a scanner. I invested in my first digital camera in 2002, a Nikon D100 with “ an incredible, film-rivaling 6.1 megapixels”. It was heaven. No more scanning, just these cute little cards that went straight into my computer. Bye bye, film!
Now it seems that everything old is new again, from vinyl to Pokemon. I was drawn to some of the work I was seeing on Instagram, and after a little research, determined that the much sought after look many photographers were going for was actually based on FILM. Hold on, I remember that stuff myself. I dug out the Nikon N65 and starting remembering how to photograph with it. Here are some of the things that I discovered about working with film again — and a great little preset that emulates film pretty nicely as well.
So, what is the draw? To me, film is so perfectly imperfect. It’s soft, dreamy and romantic and, as photographers, it can really help you relearn the basics of what we all love.
What is film?
Film is essentially a plastic with a light sensitive coating either in rolled paper (medium format – in various sizes) or a metal canister (35mm). It reacts to the light and creates what we call a negative.

Exposure
Film is a little different from digital in how the light affects the negative. With our digital cameras, if we over expose and lose highlight detail, we usually cannot get those highlights back. With film, it is much more challenging to blow out the details but it is very easy to lose the shadow detail. A properly developed negative will retain plenty of shadow detail. When we measure the settings we need to properly expose the negative, we take our meter readings from the shadows and not the highlights. If we use a light meter with our digital cameras, we would take the same reading from the highlights.
Metering
Because exposure is so important to a great image, I have really tried to force myself to meter, meter, meter. And still, my lovely editor, Alex Legget, at The Find Lab, sends me my scans with notes that they had to lift my exposures a half-stop or so!
A light meter is a handheld device that measures the available light. Different photographers meter differently, but the Mastin website suggests the following: “With the bulb on your meter in the retracted position (not popping out) meter your subject’s face. If there is a shadow side of the face meter that side. Use the shutter speed your meter tells you to use for your f stop.” 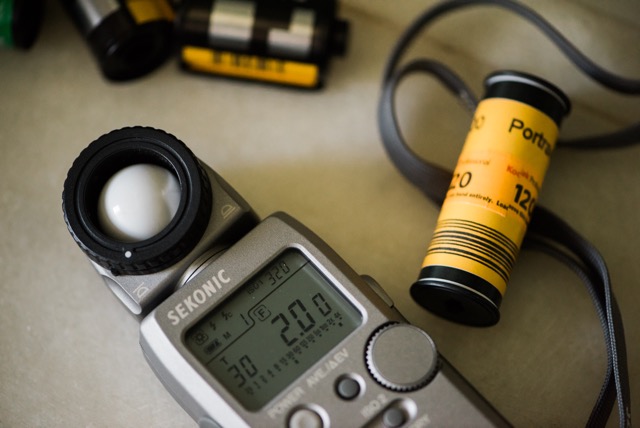 How do I change my ISO? ­
When we work with digital, we are accustomed to working with our Exposure triangle. This gives us control over:
Shutter Speed
Aperture
ISO
With film, it is a set ISO per roll. Some films, like Portra 400, are very versatile and can support a variety of ISO settings from ISO 200-800. 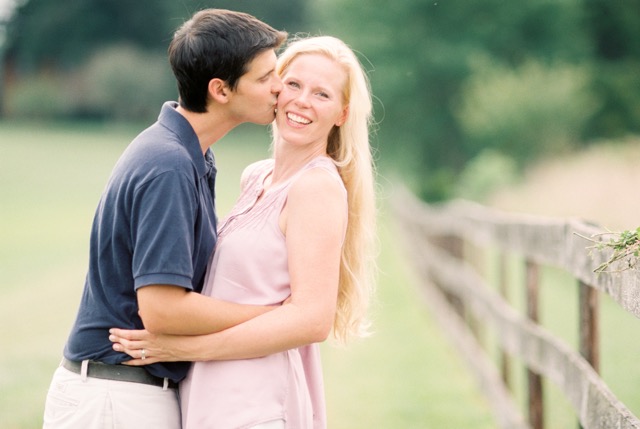 Focus
Focus is a particular challenge for me! I find myself missing my 51-point auto focusing system. My Pentax medium format is definitely the harder of the two and my favorite lens is manual. 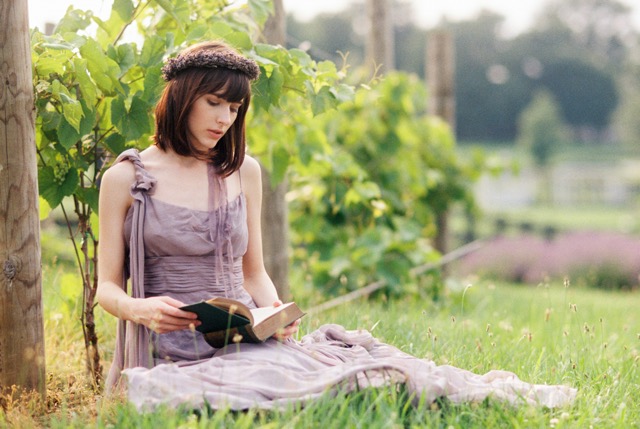 Cost
The good news is that you can get started with film, probably today, and for very little initial startup cost. The bad news is that you will start spending some of that savings to develop your images! Almost everyone has a 35 mm film camera lying around they are hoping to give a good home, and Facebook has some fabulous support groups for everyone getting started. 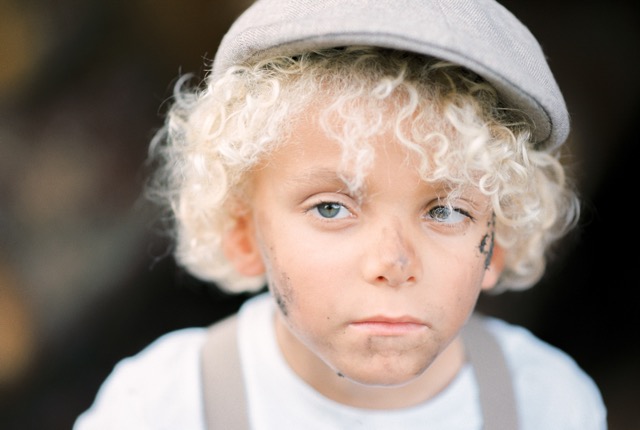 Mastin Labs
I know there are several film emulation presets out there but my favorite, by far, are those produced by Kirk Mastin over at Mastin Labs. They were developed by film users for film users, and I find them to be easy and accurate to use.
Mastin offers 3 presets: Kodak, Portra and Ilford and they match these film stocks with very few clicks. The nice thing is that when you match one, you can copy your Lightroom settings over to the others of the set and you are good to go.
According to Jeremy Chou’s “Mastin Labs Presets: A Complete User Guide for the Hybrid Photographers”, to get started with the light airy look that Mastin is known for:
a. Shoot wide open
b. Use good light, avoid extreme and jarring light, and choose open shade and softer light instead.
c. Rate your film at ½ box speed when metering
d. Use a custom white balance between 5200-5700 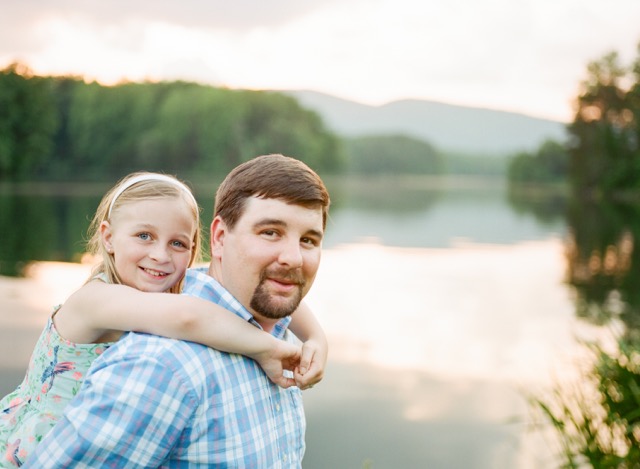 Film Stocks
Portra 160: I love the way that skin tones look on Porta 160 with perfect light which I have only managed once. I rate this one at 100.
Portra 400: The most versatile and forgiving film I use, and my go to for pretty much all situations. According to The Find Lab, it should be rated at ½ box speed or ISO 200.
Portra 800: While it seems that this should be double the speed, it is really not. It is a warm, bright light-hungry film and I rate it at 320.
Fuji 400 h: This is the light, airy film made famous by wedding photographers around the globe. It needs LOTS of light and gets rated at 200. Rumor has it you can expose up to a full 6 stops before you have any issues, but I haven’t tried it.

Film Labs
If you live by a great film lab, you are in luck. If not, you will be shipping your film out to one like the rest of us. Here are some very popular labs, with different looks and feels. They also all offer differing degrees of services. I work with The Find Lab because I enjoy learning from my editor, Alex, and I like to receive the fully edited premium scans they offer.
Here are a few others you might like to check out as well!
Photovision
Indie Film Lab
Richard Photo Lab

Why do I love film?
Mandy Johnson said it best:
“I kinda love everything about it, the sound of the film moving, the texture and depth it brings allows you to feel something more in the image. I love the modern advantages of digital for a lot of reasons, too, but with film it is a must to slow down, really breathe and think about what you are looking at and feeling with your client.”
Save
Save